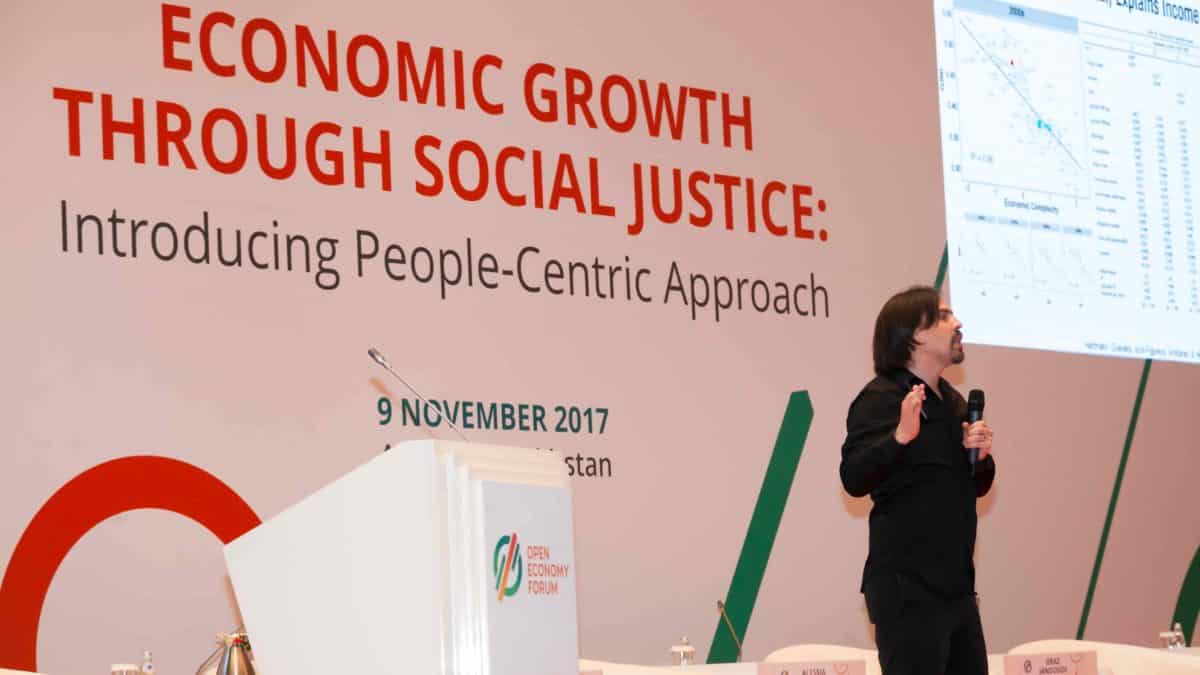 SPEAKERS OF THE OPEN ECONOMY FORUM

In order of speech

Aida Aidarkulova holds a Ph.D. in Public International Law. Her research interests include human rights, reproductive human rights and the law of armed conflict. She has more than 12 years of professional experience in the civil society sector in Kazakhstan. In 2006-2009 Aida has worked as an expert at the Institute for Law Monitoring, Expertise and Analyses in Astana. In this capacity, she was involved in the legal expertise of the different draft laws initiated by the Government of Kazakhstan including the Medical Code, Ecological Code, Administrative Offences Code, legislation on the youth participation, and etc. Aida joined Soros Foundation Kazakhstan in 2009 and as a Director of Law Reform Program, and she was responsible for different projects focused on rule of law, strengthening the bar, access to justice, access to information, human rights, and civil society development. In 2012 she became a Programs Director of the Fund. She was appointed as a Chair of the Executive Council in April 2019.

Kassymkhan Kapparov has extensive experience working in research and consulting, think tanks, government agencies, and international companies. He is the founder of Ekonomist.kz — online platform for economic discussions in Kazakhstan and a Managing Partner at the Economics and Management Consulting Group (EMCG) – consulting company that provides independent economic research on developing economies for international organizations. Research areas include: development issues of the developing economies, including FDI, knowledge-based economy, innovations and mineral resources-driven economic growth. Most recent research included following topics “The National Fund of Kazakhstan: Short-Term Gain for Long-Term Pain”, “Private Enterprise Development Policy in Kazakhstan: Size Matters” and “Invisible Public Debt: the Case of Kazakhstan”. Mr.Kapparov received his MBA from Yokohama National University (Japan) under the IMF Scholarship Program and holds an MA and BA in Economics from Kazakh National University.

Sergey Guriev, is a well-known expert in economic development, Professor of Economics at Sciences Po, Paris, former chief economist of the European Bank for Reconstruction and Development (2016-2019) and former rector of the New Economic School in Moscow (2004-2013). Dr. Guriev’s research interests include contract theory, corporate governance, political economics and labor mobility. His works including “Economic Drivers of Populism”, “Determinants of Expropriation in the Oil Sector: A Theory and Evidence from Panel Data” have been published in international refereed journals including American Economic Review, Review of Economic Studies, Journal of European Economic Association and more.

Ambassador Sven-Olov Carlsson, with a professional background as a Swedish diplomat, has gained profound experience in the European Union institutions. Through his successive assignments, Mr Carlsson has served in the system of the MFA of Sweden (1982-1996), as Deputy Head of the Representation of the European Commission in Sweden (1996-1998), in different management positions at the European Commission (1998-2009), and as Deputy Head of the Russia Division of the EEAS (2009-2013). Before arriving in Kazakhstan, he served as the Deputy Head of the European Union Delegation to Russia in 2013-2018. Ambassador Carlsson has Bachelor degrees in Slavonic Studies and Business Administration from Uppsala University, Sweden.

Alexander Poghossian is a qualified economist with over 20 years of experience in development consulting implemented both for international organizations (World Bank, OECD, KfW, European Commission, ILO, IFAD, and others), and for corporate clients such as Microsoft, Orange (France Telecom), National Instruments, Synopsys, Philip Morris, MTS, Pernod Ricard). His past engagements include full-time jobs and short-term consultant assignments as a program manager, strategy design and project evaluation expertin the relevant areas. His specific specialization is in private sector and SME sector development, competitiveness, industry and sub-sector analysis, regional economic and other development issues.

Zhanar Temirbekova, rector of Eurasian Technological University. She is a member of the International Leadership Association ILA (USA) since 2007; winner of the grant «Best University Teacher» in 2013; referee in the international academic journals such as African Journal of Business and Management and Gaziantep University Journal of Social Sciences since 2014. During her research study of the transformational leadership, Zhanar Temirbekova has been awarded the Prize of the Foundation of the First President of the Republic of Kazakhstan for the best research and her achievements in the field of science and technology. . In 2013-2016, she served as the Head of the Department of Management and Marketing at Suleyman Demirel University.

Tur-Od Lkhagvajav is a Co-Founder & President of Transparency International – Mongolia, a member of the National Open Government Partnership Task Force and National Council for EITI (Extractive Industries Transparency Initiative). Mr. Lkhagvajav is also an elected member of the Coordinating Council for Publish What You Pay/PWYP – Coalition of 30 Mongolian NGOs. Since 2013, he has functioned as a first Country Facilitator for LOGIN – Local Governance Initiative and Network for South and East Asia, and as a founding Chair of the Mongolian Foundation for Democracy and first Convener/Secretary-General of Mongolia Democracy Foundation & Network. In addition, he was appointed by the President of Mongolia as a member and elected Chairman of the Public Oversight Council at the Independent Authority Against Corruption (2014-2018). Prior to that, Tur-Od was a Legal Assistant to the President of Mongolia and Special Adviser to the Minister of Justice in 2012-2014. Tur-Od holds a Master of Laws and Development from the University of London (2006) and Candidate Doctorate of Law from the National University of Mongolia (1997).

Dariia Mikhaylishina is an economist at the Center for Economic Strategy (Ukraine). She is responsible for research in the field of human capital, particularly in labor mobility, human capital development, etc.
In 2016-17, she worked as a research fellow at the Department of Economics at the University of Warwick (England). In 2016, she was an intern at the Institute of Economic Affairs analytical center (London), and in 2017 she completed an internship at VoxUkraine. Daria holds a master’s degree in economics from University College London and a bachelor’s degree in philosophy, politics, and economics from the University of Warwick.

Serik Beissembayev — sociologist, expert of the Institute of world economy and politics at the Foundation of the First President of Kazakhstan. He is engaged in political and managerial research in the field of social policy, countering violent extremism. In 2015-2016, he completed an internship in the Central Asia program at George Washington University. He is a graduate of the public policy initiative of the Soros-Kazakhstan Foundation. Co-founder of the expert discussion platform «PaperLab» in Nur — Sultan.

Zhaslan Nurbayev, candidate of Historical Sciences and researcher. His main work activity is associated with teaching in such universities as Kostanay State University named after A. Baitursynov, JSC «University of KAZGUU named after M. Narikbayev», Eurasian National University named after L. N. Gumilev. In 2014-2015 he completed an internship under the scholarship program «Bolashak» in the specialty «Political problems of international relations and global development» at George Washington University. During 2015-2019 Mr. Zhaslan took part in expert meetings within the framework of the project «IQ-club of Russia and Kazakhstan: development of expert dialogue of the border regions of the EAEU», in Eurasian schools (Gorchakov Foundation, IAC «Eurasia-Volga region», «Ural-Eurasia»). Dr. Nurbayev is a graduate of the initiative of Soros Foundation-Kazakhstan “Public policy”. The theme of the research within the framework of the initiative was aimed at the study of small schools in Kazakhstan. In 2019 he took part in the Central Asian school of analysts Cabar.Asia, implemented by IWPR, in conjunction with the OSCE Academy. Research interests: the history of the spread of religions in Kazakhstan, confessional relations, social policy of Kazakhstan, ungraded schools, reforms in education, digitalization, memory policy and memory practices.

Victoria Tsay is an advisor to the rector of Narkhoz University, the largest economic university in Kazakhstan. She holds a Master’s degree in Business Administration from Maastricht School of Management and Master of Public Administration from Harvard Kennedy School. In more than 25 years of her professional career, she worked in public and private companies, both international and local.

Giorgi Khishtovani is a Research Director at the Policy and Management Consulting Group (PMCG) and at the PMC Research Center. His research focuses on the political economy and governance, on fiscal policy, human capital development, international trade, and global finance. He has more than 10 years of professional working experience in public, private and non-governmental sectors in Georgia and abroad and published numerous papers in academic journals. Before joining PMCG and PMC Giorgi worked as the Deputy Dean of business administration and economics faculty at Tbilisi State University (2009-2011), as a research fellow at the University of Bremen (2011-2014) and as the head of research at Institute of Development of Freedom of Information (IDFI) (2015-2017). Giorgi has extensive experience as a researcher, trainer, and consultant within the framework of various international projects conducted by the World Bank, the IFC, the European Union, UNDP, GIZ and Federal Foreign Office of Germany. He is an author of the book “Transformation of Governance Structures in Georgia, 2003-2012” and a co-author of the “Handbook of Public Administration in Georgia” (forthcoming).

Alexander Chubrik is an economist, Director of the Research Center of the Institute of Privatization and Management. He taught Economics at the Belarusian State University (2000-2004), in 2009-at the European University for the Humanities. From 2007 to 2012 he was a Deputy Director of CASE-Belarus (Poland), from 2009 he was a leading researcher of CASE – Center for Social and Economic Research (Poland). From December 2009 to January 2010 he served as an economic adviser in the Ministry of economic development of Azerbaijan within the framework of the project «Advisory Service for Macroeconomic Management and Institutional Reform», implemented by the CASE Fund. From February 2011 to January 2012 he became the head of this project. Since 2014 Mr.Chubrik has been a member of the Advisory Board of the National Bank of the Republic of Belarus. A member of the scientific Advisory Council on social and economic development under the Presidium of the Council of the Republic of the National Assembly of the Republic of Belarus of the sixth convocation since November 2016 . Professional interests: economic growth, poverty and social integration, labor market, macroeconomic modeling, applied econometrics, development of transition economies.

Nariman Mukushev, Vice-Minister of labor and social protection of population of the Republic of Kazakhstan. Nariman Mukushev has more than 10 years of experience in banking and IT. For more than 8 years he worked in JSC «Kazkommertsbank», including senior positions. He was the Head of Department of innovative technologies, led the development and implementation of GoCard credit cards, Workflow business process system, customer identification system and electronic client dossier and other projects. From 2014 to 2017 he headed the direction of innovation and IT development of JSC «Kazpost». From 2017 to 2018 he held the position of managing Director for transformation and information technologies of JSC «Kazpost».

Veniamin Alaev, human rights activist of people with disabilities, member of the Coalition of generation of human rights defenders, initiator of the project «Financial inclusion», member of the working group at the National Bank of Kazakhstan on the availability of financial services. In July 2016, he spoke at the High level political forum on the need to create the law on non-discrimination in the country, a separate program for the socialization of people previously staying in closed neuropsychiatric institutions.

Aizhan Alzhanova is a Co-founder and project coordinator of the Foundation for support of socially vulnerable women «Mama Pro», researcher. Previously, she worked as a Manager in the Procurement Department at KazMunayGas-Service, editor of the magazine for Graduates at Lehigh University, PA, was a speaker at National conferences on social topics. Participant from Kazakhstan at the 63rd session of the Commission on the status of women at The United Nations headquarters in New York in 2019. Aizhan holds a master’s degree in Graduate school of Education from Nazarbayev University and has also taken courses in entrepreneurship and media literacy at Lehigh University in the United States. Aizhan is a graduate of the U.S. Department of State programs.